The history of Genoa, including the Indian School.

The exodus of the Mormon pioneers between 1847 and 1869 was an exciting time in American history. The saga began in 1830 in Fayette, N.Y., where Joseph Smith organized the Church of the “Latter Day Saints” called the Mormon Church. The church grew in membership but opposition also grew. The group relocated in Ohio, then Missouri and finally to Nauvoo, Ill. Mobs murdered Joseph Smith in 1844.

In 1846, the Mormons left Nauvoo because of conflict and mistrust under the leadership of the new president, Brigham Young. They crossed the river and established winter quarters north of Omaha, Neb. The following spring, 143 men, three women and two children began their journey toward Salt Lake City, Utah, traveling in 75 wagons. In May 1847, an “odometer” was installed to count the revolutions of the wagon wheel to calculate mileage. The odometer could tally ten miles before starting over. This thousand-mile march is now known as the “Mormon Trail.”

The valiant group made their way to the bank of the Platte River which would be their guide for the next 600 miles. The trail wasn’t a narrow pathway in the same sense as a road. It was a corridor which might be a few dozen yards wide to several miles in width depending on the terrain. The oxen dictated the traveling speed and could only make about two miles an hour; slower than a man could walk. The Mormons eventually arrived at Beaver Creek south of Genoa. The stream was 20 feet wide and two feet deep. However, the west bank was very deep. A rope was hooked to the tongue of each wagon and 12 men hauled the wagons across one at a time. The Loup River posed another obstacle. The crossing site had sandbars, quicksand and a rapid current that reached waist-high in places. The river was 400 yards wide and split into two streams by a large sandbar in the middle. They had to unload the wagons and carry their goods across. The empty wagons were then pulled over by a rope. Once everything was loaded back in the wagons the company traveled south where they spent the weekend. This was the period that the Mormons passed the present site of Genoa.

It was decided by some to locate in this area. Under the leadership of Henry and Sarah Hudson, founders of Genoa, a colony was set. The following is a description of Genoa from Henry Hudson’s diary:

“The city of Genoa is about 102 miles from Florence (Omaha), contains about 400 acres, 10 acres to a block, 8 lots in a block, 18 rods long, 9 rods wide; the streets cross at right angles 4 rods wide. It has bluffs to the north gradually descending to the east, south and west. The ground is higher in the center of the public square and you have a view of the east some 20 miles. To the south the Loup fork can be seen with ever shifting sandbars, spotted with islands of cottonwoods, box elder, willow and some cedar; farther in the distance are the bluffs dividing the Loup and Platte Rivers.”

Great haste was made to plow, plant and fence their fields. More than 2000 acres were enclosed with ditches and a sod fence. The city of Genoa was settled by the Mormons in 1857 and was incorporated in 1884. Wagon ruts can still be seen carved into the prairie by the wheels of the travelers’ caravan.

The Skidi Pawnee lived in the Genoa area since before the 1600s. Archeological studies support this as well as recorded history including works by George Bird Grinnell, who lived with the Pawnee in 1872 and later published Pawnee Hero Stories in 1889. The Pawnee lived in scattered earth lodge settlements in the winter and went on hunting trips with tepees in the summer. They planted maize, beans, squash and sunflowers in the spring before the hunt and harvested in the fall after the hunt.

In 1834, Rev. John Dunbar and Samuel Allis began their work as Missionaries to the Pawnee. The Pawnee lived in separate villages and depended upon hunting for their subsistence, so it was not feasible to establish a mission at a fixed site. In 1839, the frequent Sioux raids convinced the Pawnee to gather together. They expected the governmnet to help them learn how to farm and to provide protection.

In 1857, the Pawnee signed the Table Creek Treaty, in which they gave up all claim to land in Nebraska except their reservation which was to be on the Loup River and is now Nance County. The government was to build an agency with sawmill, gristmill, blacksmith, other shops and a school. They were to have an agent, teachers and others at public expense and they were to have protection from the Sioux. Judge J.L. Gillis was appointed special agent for the Pawnee in 1859 and he was to induce them to leave their villages south of the Platte and go to the Loup. He promised to fulfill the treaty terms and give them protection from the Sioux. Judge Gillis, Samuel Allis, other officials and about 20 Chiefs went to select their new location. Since 1847, the Mormons had been using an old furtrader trail up the Loup River and now thousands passed this way each season. In 1857, the Mormons established the town of Genoa as a way-station to help other emigrants.

Gillis saw the improvements made by the Mormons in the village of Genoa and he decided this would be where the Pawnee Agency would be established. He forced the Mormons to leave. The agency buildings were log houses bought from the Genoa settlers. Judge Gillis built a bridge across the Beaver Creek connecting it with the Pawnee villages.

The Pawnee continued to have a hard time. The Quaker superintendent at the Pawnee school was determined to make the Pawnee self-supporting through farming. The annual buffalo hunt in 1873 proved to be the last, as close to 1,000 Sioux, Ogalala and Brule attacked the Pawnee near present day Trenton, Neb. This massacre shook the Pawnee. They knew they could never hunt again so some of them started talk of going to the Indian territories in the south. The first group left in the fall of 1874, marching from Genoa to the Red River on the Texas frontier. The government failed to assist in any way. The first day of the march, Pitalesharo, a Pawnee chief, who was opposed to the removal, was shot in his leg as he forded the Loup just south of Genoa. Some say it was his own gun, others say whites did it because of his opposition. He was returned to the agency, where he would not permit amputation of his mangled leg and died within a few days. He was buried south of the Loup. The 500 Pawnee who were still at Genoa started for Oklahoma late in the fall of 1875 and reached their destination in November. Thus ended the Pawnee stay in their homeland of Nebraska.

In 1990 and 1995, the remains of almost 1,000 Pawnee and their relatives have been reinterred in Genoa after having been held in museums and other places. These include six who were in the Pawnee Scouts. A stone marker is located at the east end of the Genoa Cemetery, on their former campsite, reading:

“In Memory of 403 Pawnees Reburied by The Pawnee Nation
September 11, 1990
Rest in peace forever.”

In the mid 1870s when the Pawnee were moved to Oklahoma Territory, the school became vacant. The government decided to use the Pawnee Agency for the establishment of an Indian Boarding School with money appropriated from Congress in 1882.

On February 20, 1884, with an enrollment of 74 students, the U.S. Indian School at Genoa was started. The school began with one building on 320 acres and grew to have more than thirty buildings on 640 acres. The school was in operation for fifty years and became one of the largest of the Federal Boarding Schools. In 1932, the peak enrollment was nearly 600 students.

The school stressed assimilation into white society with a combination of manual training and basic education. The students spent half a day learning a trade and the other half learning reading, writing and math. The school closed in 1934. The students went back to their reservations, attended other boarding schools or went on to college.

Today the U.S. Indian School Museum is housed in the Manual Training Building. Harness making, carpentry, tailoring, shoe repair and the band room were in this building. Here you can see exhibits on life at the Indian School. Murals in the upstairs west room were hand painted by Indian boys. More than 40 Tribal flags are on display representing their children who attended the Genoa School. A printing press used to print their newspaper, The Indian News and other memorabilia, is also on display in the museum.

The Pawnee Capital of Nebraska

Genoa, named and established by the Mormons in 1857, has a rich heritage. The Skidi Pawnee lived in this area since before the 1600s and the Mormon trail passed through Genoa in 1857. Visitors are encouraged to learn more about Genoa's heritage by visiting the Genoa Historical Museum. 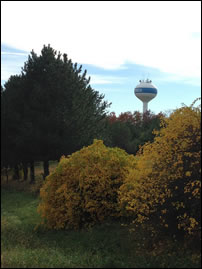